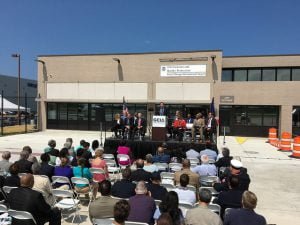 The custom’s facility is one of numerous projects to boost usage and improve business activity at the airport in recent years.

The runway expansion, which was completed in June 2015, has allowed larger planes to land at the airport and led to more passengers and an increase in cargo operations utilizing the facility. Airport officials have said increasing the main runway from 7,000 to 8,859 feet has helped increase operations at the airport by 15 percent.

Growth at the airport was behind the need for a new customs facility, according to a statement from Donnelly’s office. The opening of this new customs facility means airport users can fly into Gary from around the world without having to stop elsewhere to clear customs.

“This new customs facility is a significant upgrade for the Gary/Chicago International Airport and for the city of Gary, allowing for international passenger flights to fly directly into Northwest Indiana,” Donnelly said. “I was proud to work with mayor Freeman-Wilson and other local stakeholders to clear all the obstacles needed to extend the airport’s runway, which helped the airport move forward with its expansion plans and paved the way for this new facility. I am optimistic these infrastructure improvements will further boost the region’s economy and create local jobs.”