The Influential Women of Northwest Indiana Awards recognize the region’s most successful female professionals for influence in their businesses, industries and communities. This fourth annual event, held at the Avalon Manor in Merrillville, honored both established leaders from Northwest Indiana as well as “up and coming” professionals.

Trumbo was one of 22 Influential and Up & Coming Women to be selected as a finalist from a pool of 200 candidates across six counties in Northwest Indiana.

“We are very proud of Lauren’s accomplishments and this deserving recognition,” said Frankie Fesko, Chairman of the Board of Directors of Community Foundation of Northwest Indiana, Inc., (CFNI), parent company of Community Healthcare System.

One of four finalists in the finance category, Trumbo said the award is an honor that springs from the good work that’s carried on at St. Catherine Hospital in East Chicago and throughout the Community Healthcare System.

“When I’m surrounded by the best, it makes you want to do your best,” Trumbo said.

Trumbo’s career in healthcare began at St. Mary Medical Center in 2004 as a certified nursing assistant while she was still a college student. There, she met a certified public accountant who inspired her to pursue a career in finance.

Trumbo obtained an undergraduate and master’s degree in accounting from Purdue University Northwest, and worked as a tax accountant for Swartz Retson in Merrillville before rejoining Community Healthcare System in 2014 as senior financial planning analyst for St. Catherine Hospital. One year later, Trumbo was promoted to finance supervisor. She currently serves the hospital as interim chief financial officer.

Mary Ann Shacklett, senior vice president of Finance and CFO of the Community Foundation of Northwest Indiana, said Trumbo is a good communicator who sees her tasks clearly and has a bright future to look forward to.

“She is very well liked and interacts with all others – at all the different levels within the healthcare system,” Shacklett said. “She is a very caring person with great talent.”

“Lauren is a leader who is not only proficient in finance and accounting,” said Jo Ann Birdzell, CEO, St. Catherine Hospital. “She looks beyond the ledger for ways to educate people in personal finance and interact with the community on programs that improve the health and well-being of people in need.”

Working with local banks, Trumbo launched a year-long Financial Literacy Series in East Chicago for the public. This week, the ribbon was cut on a new Mental Health America location in leased space Trumbo negotiated with First Merchants Bank in downtown Hammond.

“I love working for this hospital, and Community Healthcare System, because of the mission and purpose behind it all,” Trumbo said. “My biggest award has been my ability to help other people.” 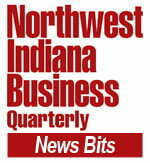