You are here: Home / Community / Business News Bits / Lakeshore PBS in running for station of the year 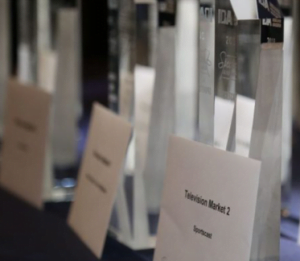 Lakeshore PBS is among the public broadcast stations in the running for the 2019 Spectrum Awards’ Station of the Year. The winner will be announced Oct. 24.

Lakeshore PBS is among a group of Indiana television stations in the running for the 2019 Spectrum Awards’ Station of the Year for outside the Indianapolis market.

James Muhammad, president and CEO of Lakeshore Public Media, said to be recognized by the Indiana broadcasters for the work done by his staff is a great honor.

“This time last year, we had been off the air to nearly half of our audience for about three months after a violent storm damaged our transmitter,” he said. “Although we would return to some viewers after a low-power transmitter was installed, it would be nearly a year before we returned to our full broadcast capabilities.”

The competition is open to all FCC licensed IBA member radio and television stations in Indiana. Lakeshore PBS, based in Merrillville, is competing against commercial stations WBND of South Bend and WPTA of Fort Wayne for the award. This is the second time in three years that Lakeshore PBS was nominated for this award.

Winners will be announced during the Indiana Broadcasters Hall of Fame Luncheon on Oct. 24 at the Event Centre in Carmel.