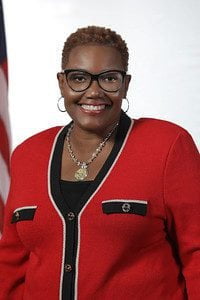 Karen Freeman-Wilson has her next role lined up once her term as mayor of Gary ends on Dec. 31.

Freeman-Wilson was named president and CEO of the Chicago Urban League, an established organization that has worked for economic, educational and social progress for African Americans. She begins in January.

“Karen Freeman-Wilson has a depth of leadership experience and a demonstrated passion for the issues of equality and social justice that are central to the mission of the Chicago Urban League,” Eric S. Smith, chairman of the Chicago Urban League board, said in a statement announcing Freeman-Wilson’s appointment. “We are confident that she will be a strong, visionary leader who will continue to advance the organization’s excellent work toward serving the needs of African-American communities and advocating for equity.”

Freeman-Wilson looks forward to her next career chapter.

“I am excited about the opportunity to join the Urban League team,” she said “I am humbled by the opportunity to build on the legacy of Barbara A. Lumpkin and her predecessors who have been amazing community advocates for justice, housing, employment and business development.”

Freeman-Wilson also previously served as the Indiana Attorney General, Director of the Indiana Civil Rights Commission and as presiding judge of the Gary City Court. She is licensed attorney and engaged in private practice for 25 years with a focus in municipal finance, government relations, family and criminal law.

The Chicago Urban League said Barbara Lumpkin, who has served as the organization’s interim president since June 2018, will continue in the role until Freeman-Wilson can begin.