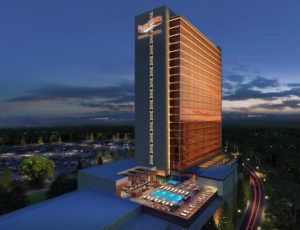 A new 23-story hotel will be added onto the Four Winds casino in South Bend.

A statement from the Pokagon Gaming Authority, which oversees the management and operations of the Pokagon Band of Potawatomi Indians’ gaming businesses, said the new hotel will feature 317 rooms and 83 suites. It also will have a spa, convention area, meeting space, ballroom, lounge, bar and grille and outdoor roof-top swimming pool.

Matthew Wesaw, tribal council chairman and president of the Pokagon Gaming Authority, said the tribe has been pleased with the community response and performance of the South Bend casino.

“Not only is this expansion an important milestone for all Pokagon citizens but it also demonstrates our ongoing economic commitment to support the South Bend Community,” he said.

The tribe expects construction to last about two years. The project is expected to create 400 temporary construction jobs and 100 permanent jobs once the hotel is operational.