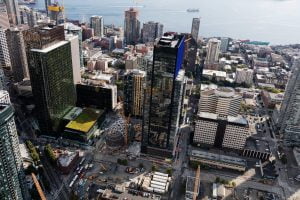 An aerial view of Amazon’s campus one headquarters in downtown Seattle. (Photo provided by Amazon)

Indiana may have missed out on landing the coveted second headquarters of internet giant Amazon but Gov. Eric Holcomb believes pursuit of the company positioned the state as a global business destination.

“I am proud of Indiana’s efforts to pursue Amazon’s second headquarters,” Holcomb said in a Nov. 13 statement, issued the same day Seattle-based Amazon announced it had selected New York City and Arlington, Va. as locations for its second headquarters. “Our economic development teams worked with all the key partners to quickly and creatively put together an outstanding proposal and coordinated our efforts with leaders in northwest, central and southeast Indiana.”

Gary and Hammond were among the more than 230 cities and metropolitan regions across North America that submitted bids for Amazon’s HQ2. Business news website Quartz compiled a list of all the bids it could locate and found 238 submissions.

Indianapolis also submitted a bid, which made Amazon’s list of 20 finalists in January. Southeast Indiana was part of a regional bid submitted by Regional Economic Development Initiative Cincinnati, which also included communities in the greater Cincinnati, Northern Kentucky and Southwest Ohio areas.

Holcomb said Indiana communities that responded to the Amazon bid “showed the world that Indiana has become a global destination for business and a thriving community for tech.”

“We’ll continue to work with Hoosier communities and companies like Amazon, with their more than 9,000 Hoosier employees, to take Indiana to the next level and ensure we are the very best place to live, work and play,” Holcomb said.

Amazon’s quest for a second headquarters location drew in cities of all sizes hoping to land the company’s promised $5 billion investment and pledge to create more than 50,000 high-paying jobs. Amazon also announced Nov. 13 it selected Nashville for a new Center for Excellence for its operations business, which is responsible for its customer fulfillment, transportation, supply chain, and other similar activities.

Amazon’s operations Center of Excellence, which will be in downtown Nashville, will create more than 5,000 jobs.