You are here: Home / Community / Business News Bits / Global defense and security firm Saab’s new US advanced manufacturing site will bring up to 300 jobs to Indiana 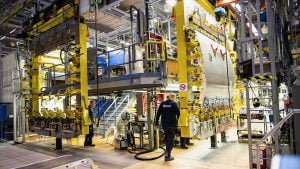 Sweden-based global defense and security company Saab will bring up to 300 jobs to Indiana once its new advanced manufacturing site is operational. (Photo provided by Purdue University/Saab)

A Sweden-based global defense and security company will bring up to 300 jobs to Indiana once its new advanced manufacturing site is operational.

Gov. Eric Holcomb joined representatives for Saab and Mitch Daniels, president of Purdue University in West Lafayette May 8 where the company announced plans to establish a new production facility at the Purdue University-affiliated Discovery Park District Aerospace. According to the state, the Saab facility will support production of the U.S. Air Force’s next generation T-X jet trainer.

The company is expecting to begin hiring in 2020.

“Indiana has long been a national leader in manufacturing, and (this) announcement demonstrates the Hoosier state continues playing a key role in propelling the industry forward by attracting investment from around the globe,” Holcomb said. “Saab’s decision to fuel its United States growth in West Lafayette is a testament to the state’s pro-growth business climate, strong aviation and defense sectors, and commitment to fostering innovation by collaborating with our renowned universities and businesses to solve 21st century challenges.”

The Stockholm-based company will invest $37 million to locate and build an Indiana-based workforce in West Lafayette, the state said. Saab will construct and equip a facility to manufacture a significant portion of the T-X advanced pilot training aircraft, which will help train future U.S. Air Force pilots.

The U.S. Air Force selected the Boeing-Saab partnership in September 2018 for the T-X pilot training program and plans to purchase 351 jets in the first phase, the state said. In Indiana, Saab will produce major aero structures for the T-X, which features an all-new aircraft designed, developed and manufactured by Boeing and Saab.

“This is a historic moment for Saab,” said Håkan Buskhe, president and CEO of Saab. “After careful consideration, we have chosen West Lafayette, thanks to the visionary leadership of both the state of Indiana and the world-leading Purdue University.”

Construction of the facility is expected to begin in 2020. Saab expects to begin hiring for assembly operators and airplane mechanics as well as for logistics, manufacturing engineering, administration and management roles.

The company will also co-operate with Purdue University to expand Saab’s U.S.-based research and development within possible focus areas, such as sensor systems, artificial intelligence and autonomous systems.

Subject to approval of the Indiana Economic Development Corporation board of birectors, the IEDC will offer Saab up to $3.9 million in conditional tax credits and up to $1.15 million in training grants over two phases based on the company’s job creation plans.

The IEDC will also offer up to $200,000 in conditional tax credits from the Hoosier Business Investment tax credit program based on the company’s planned capital investment in Indiana.

These incentives are performance-based, meaning the company is not eligible to receive incentives until jobs are created and qualified capital investment is made, the state said. The Purdue Research Foundation, the city of West Lafayette, the city of Lafayette and Tippecanoe County all offered additional incentives.