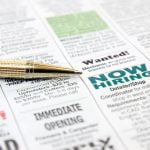 Stay-at-home orders and business shutdowns in recent weeks because of the pandemic were the main causes of unemployment soaring sharply, experts say.

Indiana’s jobless rate in April was 16.9%, up from 3.2% from March, the Indiana Department of Workforce Development reported. It reflects a 13.7% monthly change.

The Gary metro area's jobless rate was 19.8%, up from 3.1% in March. The Elkhart-Goshen area, dominated by recreational vehicle makers and suppliers, had an unemployment rate of 29.3%, up from 2.7% in March.

The sharp rise was expected by economists, who several weeks ago projected double-digit increases in unemployment because of the pandemic.

The monthly unemployment rate is a U.S. Bureau of Labor Statistics indicator that reflects the number of unemployed people seeking employment within the prior four weeks as a percentage of the labor force.

Indiana's total labor force, which includes both Hoosiers employed and those seeking employment, stood at 3.23 million in April, the state said. The state’s 61.4% labor force participation rate is above the national rate of 60.2%.

The state said private sector employment in April decreased by 405,200 over the year and by 380,500 over the previous month. The most affected industries included leisure and hospitality (-116,000), manufacturing (-78,200) and private educational and health services (-54,200).