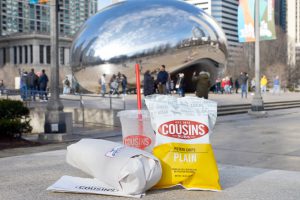 Cousins Subs, a Wisconsin-based sub shop established in 1972, marks its return to Indiana with the opening of a location at 10533 Broadway St. in Crown Point in early September.

A representative for Cousins Subs said construction delays have made the originally planned Aug. 31 opening date not possible.

The Crown Point shop marks the chain’s return to Indiana since its last location closed in 2008. The company had three Indiana shops in 2007.

The Crown Point location will be owned by franchisees and brothers Amit and Kalpesh Patel of Chicago and Munster, operators of OM Group, a multi-brand business established in 2006, which runs several recognized restaurant brands including Dunkin’ Donuts, Rosati’s Pizza, Wingstops and several gas stations.

Cousins Subs announced in August 2018 that the Patels signed a multi-development agreement with the company to develop 40 restaurants in the greater Chicago area, including Indiana, during the next several years.

The Crown Point Cousins Sub shop will be the third opened by the Patels. The Patels’ other Cousins locations are in downtown Chicago and Lombard, Ill.

Representatives for Cousins Subs said in April 2018 the company hopes to open at least five additional locations in Indiana but did not specify a timeline.

The company, which completed a six-year rebranding and remodeling process, operates nearly 100 locations around Wisconsin and Illinois.
Expansion into the Chicago area and Indiana is part of the company’s plan to grow in the Midwest.

Cousins Subs is a family-owned venture launched by Bill Specht and his cousin Jim Sheppard.