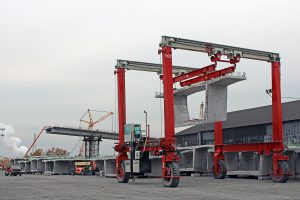 Region residents soon will have a quicker route to Chicago.

The bridge project, which is being privately funded and has an estimated cost of $150 million, hit a project milestone in November when the last of 685 concrete segments, which will comprise the bridge's driving deck, were completed. As of late October, more than 270 of the segments were installed.

The segments were cast in a 24,600-square-foot building located at the project site using local labor and materials, which allowed for production in a controlled environment and quick access for workers. Each concrete segment weighs between 60 tons and 90 tons but will appear seamless when completed.

The bridge project development agreement was finalized in 2012. Construction began in June 2017.

The bridge was closed by the state because it was deemed unsafe. Restoration of the Cline Avenue Bridge will reconnect SR 912 to I-90.

According to project representatives, the elevated section of the new bridge is 6,235 feet long, more than one mile. The total length of the project including the existing steel beam portion is 9,850 feet or just over 1.5 miles.

Drivers who utilize the bridge will have to pay tolls. The reopened bridge will be incorporated into existing electronic toll payment networks including E-ZPass and iPass but if a driver does not have an active transponder, they will be invoiced through the mail, according to project representatives.