The 50th anniversary of the Port of Indiana-Burns Harbor in 2020 was not marked by a big celebration.

The global pandemic derailed any formal event, but operators, businesses based at the port and economic development professionals recognize its importance as an international shipping hub. And they are sure the next half century will provide even greater opportunities as the facility undergoes $20 million in upgrades.

“It’s another highway for us,” said Don Koliboski, vice president of economic development at the alliance. Water access to the St. Lawrence Seaway and the Gulf of Mexico adds to Northwest Indiana’s ability to serve as a gateway to the global marketplace.

Indiana’s deep-water port on Lake Michigan connects bulk and liquid goods traveling by ship, barge, rail and truck to designations worldwide. It handles freight from the St. Lawrence Seaway, anywhere on the Great Lakes and from the inland waterway system.

It’s big business. A 2015 study by Martin Associates on the economic impact of the Ports of Indiana determined the port was responsible for almost 30,000 jobs and indirectly created another 10,000 jobs.

The port was responsible for creating more than $1 billion in local spending.

The total value of economic activity was almost $4.9 billion, the study said.

The port is mostly full but does have some vacant land, including the 57 acres acquired in the early 2000s from National Steel when the Midwest plant in Portage, on the port’s western edge, was eager to shed land it didn’t need, said Ian Hirt, port director. U.S. Steel now owns that mill.

The port is home to a large Russian-owned mill, NMLK Indiana, formerly Beta Steel. The mill uses an electric arc furnace to melt scrap metal and sometimes slabs to create new steel for its customers.

Frick Services is one of the oldest tenants at the port. Dan Frick, president of the Wawaka-based company, said the port works well for his business.

It’s all about location, he said.

Karen Lauerman, CEO of the Lake County Economic Alliance, said bulk shipments are costly to send over the road.

“(The port) is an absolute sales tool,” she said.

Koliboski said the modernization project at BP happened in part because of the ability to ship heavy parts by ship. Those materials could not have been transported by road.

Road salt and bulk material for primary metal manufacturers come through the port, Koliboski said. So do steel and steel coils, some of which is further processed at Northwest Indiana mills and some of which competes with domestic steel.

The port is a good example of how infrastructure drives private investment, Lauerman said.

“It is a regional asset to all seven counties,” she said.

Among the advantages the port brings to Northwest Indiana is the ability to have a foreign trade zone, which offers tax benefits to companies.

“That inventory sits in a designated, gated area of your building, your yard,” Lauerman said.

The trade zone benefits can extend beyond the port’s physical footprint.

“That’s something that quite often gets overlooked,” Koliboski said. “They can get those parts shipped in right directly to their facility.”

He said it’s another marketing tool and another benefit to doing business in Lake County and Northwest Indiana.

“You have access to the world in Northwest Indiana with the Port of Indiana-Burns Harbor, major rail lines, interstate highways and Gary/Chicago International Airport,” Koliboski said.

The port’s rail investments over the years include eight Class 1 railroads — which can accommodate the largest carriers, including Norfolk Southern and CSX — and two short-line railroads connecting to the port. There is access to Interstate 94, a short drive down Indiana 249 from the port. Then there are the ships and barges that offer access to the world.

For Frick Services’ dry and liquid commodities handled at the port, the site allows convenient access to markets within a 100-mile radius and sometimes farther, depending on market conditions, Frick said.

Frick’s father was the visionary who started using the port for shipping operations. The company has expanded since its initial investment there, Frick said.

The port has plans to grow too. It is building two 100-car rail yards, one on each side of the port. It also will get 2,000 feet of new dock, which will make it easier to unload and store ships. That requires leveling land on the far side of an existing slip, Hirt said.

The new rail yards will be a major benefit to companies, including Frick, allowing customers’ rail cars to be stored while others are being loaded.

It also will allow the creation of unit trains, which transport more than 90 rail cars of a single type of freight from a single customer to the port or from the port to a single customer. Unit trains can bypass intermediate rail yards. Goods typically shipped in unit trains include corn, wheat, sand, coal and rock, according to Union Pacific Railroad’s website.

Rail lines abound at the port, as does truck traffic. Building a railroad track, as the port commission’s contractor is doing now, requires sinking the rail bed lower than normal, so a truck can cross it anywhere. The rails can stick up only an inch above the surface, Hirt said.

Creating the right infrastructure is all in a day’s work for the port commission.

“We built our roads to make them extra heavy duty,” Hirt said.

In August, among the cargoes handled at the port were heavy components for a new natural gas power plant in Elwood, Illinois.

Semi-tractor trailers seen on the nation’s roadways also are common features at the port; however, larger items require extreme transport. There are occasions when specialized trailers with 288 wheels are needed to carry 300-ton pieces of machinery, port officials said.

That’s compared to the Port of Toledo, which is in its downtown, where trucks must deal with several overpasses there.

Carrying cargo by ship keeps a lot of trucks off the road. Each ship is worth roughly 1,000 trucks in terms of the cargo being transported, Hirt said.

It takes two or three days to unload each of the ships at the Port of Indiana.

As the nation shifts from coal for generating electricity, the port has found a role in that transition.

The giant blades that require a police escort are heading toward wind farms in the Fowler area. Specialized components made in Europe also are sent by ship to the port.

“The gearing mechanisms are bigger than a house,” Koliboski said.

Components for natural gas power plants in Niles, Michigan, and Elwood, Illinois, arrive at the port after being built offshore, Hirt said.

Over the years, large tanks for making beer also have come through the port, as have raw material for steel, finished steel and food cans produced in Europe, he said.

Most of the cargo coming to the port in Portage is headed to Northwest Indiana or the Chicago area, Hirt said.

Portage Mayor Sue Lynch is a big fan of the port.

“We have a gem in our city that I think a lot of people don’t even know exists,” Lynch said.

Access to the port requires a photo ID. A large “restricted area” sign leading to the port deters people who don’t belong there. Fishermen are welcome, however, at the public fishing access point.

“For years, we had a great relationship with the port,” Lynch said.

Since taking office in January, she has made a point to improve the city’s relationship with the port.

“It’s huge, huge business in our city,” Lynch said. She hoped to set up a tour of the port for City Council members to learn more about it. Lynch cited some of the statistics for the port. Each year, she said, it handles about:

Hirt said another project at the port is to create a place for truckers to gather. The designated spot behind the port commission’s office keeps them from idling their engines while they wait in line for a load. That reconfiguration is among many environmental improvements there.

Another planned improvement is to build another warehouse.

“You need a place to physically put that cargo,” Hirt said.

The northwest corner of the port has been designated for space to put down materials. Traditionally, bulk cargoes are stored outside, but putting them under a roof protects the environment, Hirt said.

Officials at the Ports of Indiana are concerned about the environment, and it shows, Lauerman and Koliboski said. That mindset goes back to the very beginnings of the port.

“I love the history of the port and how it started,” Lynch said.

The port is the result of a major bargain struck in Congress between environmental and business interests. With the creation of what is now Indiana Dunes National Park came the construction of the Port of Indiana, now Port of Indiana Burns-Harbor. Today it is one of three ports operated by the Ports of Indiana. The other two are on the Ohio River in southern Indiana.

The Port of Indiana Burns-Harbor concentrated future economic activity in that location rather than continuing to scatter across the shoreline. The National Park Service bought up property elsewhere along the shoreline to protect it from development or, in some cases, restore it to its natural state.

One downside from the port’s construction is the effect on the littoral flow of sand along the shoreline. That effect can starve beaches immediately west of the port, in Portage and Ogden Dunes.

“Sand is kind of constantly moving around,” Hirt said.

The flow of sand also means that dredging is required every 10 to 15 years. Record-high water levels are followed by record lows.

Among the challenges facing the port is dealing with high water, which might seem easier for ships to navigate.

But it’s more complicated than that.

“It’s unsafe to navigate ships in water that is moving too rapidly,” Hirt said.

Another challenge is how to remain competitive as global shipping trends shift.

“We don’t do a lot of containers,” Hirt said.

Newer container ships have become too big for the St. Lawrence Seaway. Those goods from Asia typically arrive on the West Coast and are transported by rail to an intermodal hub nearer their destination. Then the containers are transferred onto semitrailers.

Those newer container ships can be twice as long as the locks on the St. Lawrence Seaway, and they require deeper water than at the port and the rest of the seaway. It’s all a matter of the sea level, Hirt said. It would take a lot of dredging to make the port and the locks deep enough to handle the larger vessels.

And while the cargo heading to Portage typically stays within the Chicago/Northwest Indiana area, it can go farther.

New Orleans can unload container ships onto barges and rail cars for shipment to the interior of the country. The newer ships offer economies of scale.

“We really compete with the coasts,” Hirt said. With the Illinois International Port in Chicago about 18 miles away, the Indiana port offers proximity to Chicago at a lower cost.

As container shipping increases, it will become increasingly difficult to compete with New Orleans for goods sent to St. Louis, Hirt said.

But the freshwater lake the Port of Indiana-Burns Harbor calls home is a benefit.

The initial dock walls at the port were put in 50 years ago. That might seem like a long time, but keep in mind that lake-based vessels last longer than ocean-going vessels. Saltwater corrodes metal faster.

That makes 50 years in the life of a port just the beginning. Officials are sure, with continuing improvements, new tenants and ventures are on the horizon.

“They’ve been hitting records for years,” Lauerman said. “They’ve got a bright future.” 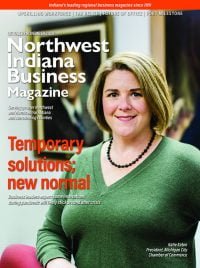